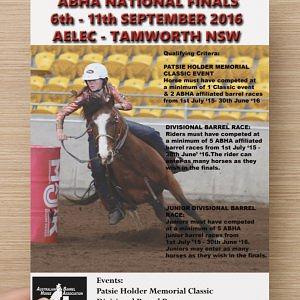 The Australian Barrel Horse Association Inc was formed in 1996 and was the brainchild of Jeanette Belshir, nee Murray. Jeanette, a former WPRA rookie of the year and NFR Average Champ, approached two friends Shona Tribe & Susan Keenan who she knew were equally as passionate about barrel racing as she was. Together they formed the ABHA, became incorporated and started running divisional jackpot barrel races in the Tamworth region.

The girls were approached by Rick Tranter, a professional reining horse trainer and owner of the new Mavericks Western Wear based in Brisbane. Rick spoke to the girls about running aged events as he could see the potential and market for horses in the sport of barrel racing. In 1996 the ABHA ran the first aged Barrel Racing event it was a Classic. Rick gave his services to run clinics for three years with the proceeds of these clinics going to the prize money for the “Mavericks Classic” which was for horses 6 years & under.

The growth of the ABHA was steady but the potential could be seen and with the assistance of Kerrie Holder, Elders became the major sponsor for four years. The “Elders Classic” was held in Tamworth with great support and dedication from the members. Not only was the classic held at these days but also a divisional and youth barrel races, the prize money for these events often coming from the hard work of members holding clinics and raising funds.

In 2002 the first affiliate of the ABHA was formed by Vicki Schiller, who held jackpots and clinics to finance the first Turn & Burn Southern Derby at Wagga Wagga in 2004 which still continues today but is held at Tumut.

The first President of the ABHA was Jennette Belshir. The next Presidents were in order - Shona Tribe, Cathrina Hutton, Liz Daly, Vicki Schiller and Adele Edwards. Our Current President is Cathy Raaen.

Membership of the ABHA is open to both male and female of any age, riding any horse. The ABHA was formed to provide members a place to start and compete on their young or old horses, that was friendly and inexpensive.